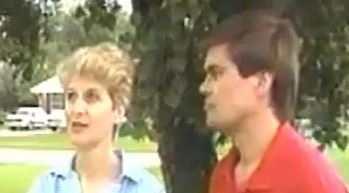 After arriving in Brookfield, Wisconsin, USA, some 35 years ago, Linda and I were interviewed twice due to political developments in South Africa.  One of our local television stations, TMJ4 (WTMJ-TV), is an NBC affiliate.  For the first interview, news team Melodie Wilson and Mike Jacobs were on air, and reporter Bob Nenno interviewed us at our home.  The discussion was lengthy.  After editing, we were on T.V. for a couple of minutes.

Linda and I were on T.V. twice, the first on August 14, 1989, when PW Botha stepped down, ceding political control to F.W. de Klerk, and the second on February 11, 1990, when Nelson Mandela got released from prison.  The second time Elizabeth Kay was the network anchor, and Jeff Fleming interviewed us at home, where we were living at the time.

Frederik Willem de Klerk, born March 18, 1936, is a retired South African politician who served as State President of South Africa from 1989 to 1994 and as Deputy President from 1994 to 1996.  As South Africa’s last head of state from the era of white-minority rule, he and his government dismantled the apartheid system and introduced universal suffrage.

The second interview took place after Nelson Mandela was released from prison on February 11, 1990.  Nelson Rolihlahla Mandela (July 18, 1918 – December 5, 2013) was a South African anti-apartheid revolutionary, statesman, and philanthropist who served as President of South Africa from 1994 to 1999. He was the country’s first black head of state elected in a fully representative democratic election.  His government focused on dismantling the legacy of apartheid by tackling institutionalized racism and fostering racial reconciliation.

Leaving Victor Verster Prison on February 11, Mandela held Winnie’s hand in front of amassed crowds and the press; the event broadcasted worldwide.  Driven to Cape Town’s City Hall through crowds, Mandela declared his commitment to peace and reconciliation with the white minority.  Still, Mandela made it clear that the ANC’s armed struggle was not over and would continue as “a purely defensive action against the violence of apartheid.”  Mandela expressed hope the government would agree to negotiations so that “there may no longer be the need for the armed struggle.”  Mandela insisted that his main focus was to bring peace to the Black majority and give them the right to vote in national and local elections.

South Africa’s general elections were held between April 26 and 29, 1994.  Linda and I drove to Chicago, Illinois, to the South African Embassy to cast our vote.  I assume that there is no doubt that we voted for the Democratic Party.  Nineteen political parties took part in the elections, only seven gained seats in the national assembly.  The African National Congress (ANC), still the current ruling party, took 62% of the vote from 19 million voters, gaining 252 parliamentary seats of the 400 allocated.  The Democratic Party gained 1.73% of the vote that awarded them 7 of the 400 assembly seats.  Today, the newly constituted Democratic Alliance holds 84 of the 400 seats (21%).  The ANC holds 230 of the 400 seats (57%).  South Africa has 14 active parliamentary parties today.

Our family became citizens of the United States of America on May 29, 1998, the day that Wisconsin celebrated its sesquicentennial (150 years) anniversary after becoming the 30th state accepted into the union.

Sadly, Melodie Wilson Oldenburg passed away from cancer at 59 on November 9, 2009.  Mike Jacobs started at TMJ4 in 1977, served for 37-years, and retired in 2015.  I could not find current information about Bob Nenno, Elizabeth Kay, or Jeff Fleming.